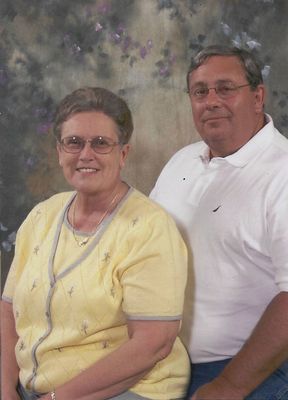 The Center Methodist Church provided the setting for the Friday, May 15th 1970, 7:30 pm candlelight wedding of Miss Nancy Martin and William Harris. Vows were spoken before an altar banked with white daisy mums. The Rev. Paul Powell officiated at the double ring ceremony in the presence of family and friends.
The bride is the daughter of the late Virgil and Elizabeth Martin of Hannibal. The groom is the son of the late Clifford “Tip” and Maxine Harris of Center.
Miss Sharon Jackson of Hannibal served as the brides only attendant. Roger “Butch” Anderson of Center was the Best Man.
They are the parents of three children Amber Baxter (Mike) of Hannibal, Melody Reynolds (Darin) of Center, and Caybree Harris of Center. Grandchildren are Kalin Shultz, Adam Baxter, Reagan Shultz, Callie Reynolds, Cole Baxter and Carson Watson
Bill was a Heavy Equipment operator for the Operating Engineers Local 513 for over 50 years. Nancy was Bookkeeper with the Ralls County School District, Mark Twain Supply Company and a teller at Roosevelt Bank. Together they built, owned and operated Westview Nursing Home in Center. After leaving the nursing home business, they opened Cartridge World in Hannibal and Quincy. Deciding to slow down in retirement they closed their stores and opened Cartridges Plus out of their home.
A card show is requested for the couple. Cards may be sent to 46482 Sycamore Trail, Center, MO 63436.

Precautions to be taken during candidate forums