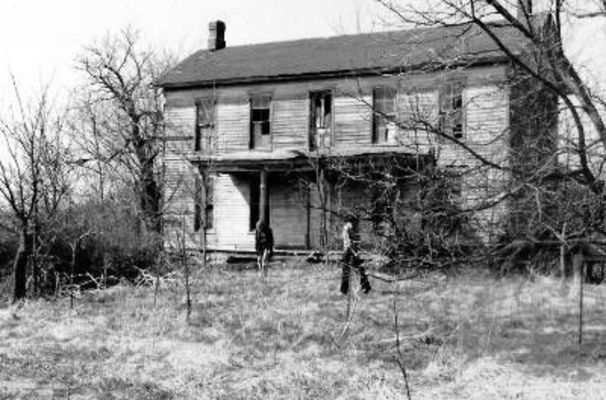 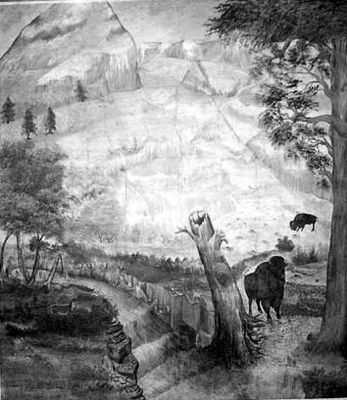 This article and the photo are courtesy of Ron Leake, president of the Ralls County Historical Society.

Batty Farm Mural Removed by Corps
Efforts made by the U.S. Army Corps of Engineers at Clarence Cannon Dam and Mark Twain Lake, have resulted in the removal of a 6 foot by 8-foot wall mural from a hundred year old farm house which now stands on government property. The house is scheduled for removal this fall. The mural was saved by the Corps with the hopes of placing it in the M.W. Boudreaux Visitor Center as an exhibit of the rich cultural history in northeast Missouri. The Visitor Center is scheduled to open in May 1984.
The house was built in 1880-1881 by a prosperous farmer named Samuel F. Bell. He died the following year leaving the farm to his wife Elizabeth and their three daughters. The property remained within the family for 72 years after his death. Bell’s daughter Cordelia and husband George Jones bought the farm from the other heirs and it was Jones who commissioned the three murals in the house. Two of the paintings were ruined by re-plastering the walls. The third painting was located in an upstairs room and depicts a two-dimensional mountain scene with buffalo, prairie dog holes and deer. The final owner of the house prior to government purchase was Mr. Earl Batty of Center.
The Corps first contacted the Smithsonian Institute who deemed the painting not significant on a national level, however agreed that it is of local cultural importance. After searching for professional help through art museums in several cities, the Corps learned of a man named Paul Schwartzbaum who is the chief conservator and restorer for the International Center for the study of the Preservation and the Restoration of Cultural Property. Mr. Schwartzbaum was in the United States working for the National Park Service at the time and was able to spend a day at the house explaining to the Corps personnel how to clean and seal the painting before removal. Corps maintenance personnel Claude North, Mike Hays, Nick Mudd, and Frank Howald were successful in actually removing the wall from the second story room. The entire wall, painted plaster, lathing, and studs had first to be sandwiched between layers of foam and plywood, then, using fiberglass crate strapping to hold the entire piece in place, the wall was lowered onto a flatbed truck and taken to a warehouse for storage. Restoration of the mural is scheduled to begin in 1983.
The Corps is continuing to compile a history of the painting and other local folklore to aid in the formation of exhibits for the Visitor Center. If anyone has any information on the mural or other historical data connected with the project, please contact the Mark Twain Lake Management Office, Route 2, Monroe City, MO 63456.