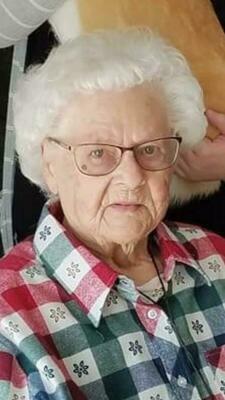 Services for Lorena May Rohning, 97, of Center, will be 12:00 P.M., Wednesday June 16, 2021 at Bienhoff Funeral Home in Perry with Reverend Dan Peters Officiating.

Visitation will be from 10 A.M. until the time of the service at the funeral home.

Lorena was born December 20, 1923 the daughter of Joseph Leslie Norman and Maudie Walton Norman. She was born and raised near the Salt River close to Florida, Missouri. Lorena was very proud that her father served in World War I. He served in Germany and France. He proudly rode shotgun for General John J. Pershing. He was in the 33rd Division that fired the last shot ending the war. He also claimed he ended it as he fired an instant late. The general gave him a mean look then smiled.

She married Ralph Richard Rohning on June 7, 1942 in Hannibal by brother Golden. She wore a blue dress with red roses, ate dinner and then they returned home. Lorena and Ralph were always farmers and worked side by side. They both enjoyed attending farm sales and visiting with neighbors. Ralph preceded her in death on June 23, 2006.

Lorena was always active with the Heavenridge Country School. Everything from square dances, plays, baseball games and last day of school at Florida Park and Shrine. Her family was her pride and joy. She was a Baptist by Faith. Lorena was always a strong Democrat. She admired Presidents Harry S. Truman, John F. Kennedy and Bill Clinton.

Lorena spent the last three years at Westview Nursing Home. We appreciated the loving care she received. COVID was hard for all the residents to understand. Lorena was known as "Grandma" to the nursing staff and residents at Westview which describe the caring lady she was.

A special thank you to her admired Dr. Mark Tucker and Amy at Center. Our loving thanks to the Community Loving Care Hospice of Bowling Green, MO. Lorena's nurse Marci was so helpful to our family. She was always one call away for our help. She is so appreciated and will be remembered.

Memorial contributions may be made to Lick Creek Cemetery, PO Box 430, Perry, MO 63462

Online condolences may be made at www.beinhofffuneralhome.com.