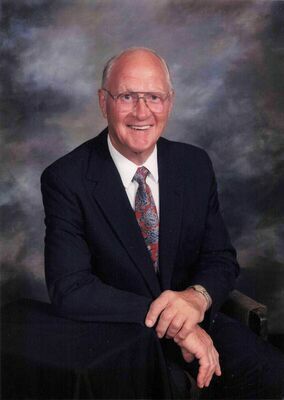 A Mass of Christian Burial for Ben L. Oligschlaeger, 88, of Laddonia, will be held at 10 a.m. Thursday, January 7th at St. John's Catholic Church in Laddonia with Father Louis Dorn officiating. Burial will be

in Laddonia Cemetery with full military honors provided by American Legion Post 510.
No visitation is planned. Arrangements are under the direction of Bienhoff Funeral Home.
Mr. Oligschlaeger passed away at 9:25 a.m. January 5, 2021 at his home.
He was born May 6, 1932 in Martinsburg, the son of John Anthony and Gertrude Matilda Schulen Oligschlaeger.
He married Myrna Jean Bienhoff in Laddonia on October 9, 1954 and she preceded him in death on August 3, 1995.
Survivors include: one son, Clyde Oligschlaeger of Perry; two brothers, Lawrence "Bud" and Carl "Pee Wee" Oligschlaeger, both of Wellsville; and several nieces and nephews and a host of other relatives

and friends.
He was preceded in death by three brothers, Frederick "Fritz", Ambrose and John Oligschlaeger; three sisters, Mary Bollman, Rita Russo and Barbara Oligschlaeger; and one daughter-in-law, Cheryl Oligschlaeger.
Mr. Oligschlaeger was a lifetime area resident and member of St. John's Catholic Church. He served in the United States Army during the Korean War where he attained the rank of Sergeant, He worked for 45 ½ years for National Refractories. In 1987 he won the World Brick Skidding Championship in Vandalia. He was a lifetime member of American Legion Post #510 in Laddonia and VFW Post 3772 in Mexico. He was a 3rd degree member of the Knights of Columbus Council 3760 in Mexico and member of the former Pop-A-Top Snowmobile Club. Ben served as a hunting guide at National Refractories for 42 years. He loved to hunt, fish, camp and cooked for many area benefits.
Pallbearers will be Bo Oligschlaeger, Steve Maxwell, Billy Stanford, John Schlemmer, Bill Wright, Denny Wright, John Wren, Gary Hodges and Pete Engle.
Memorial contributions may be made to the Laddonia Cemetery Association, 101 N. Jefferson St., Room 104, Mexico, MO 65265.
Online condolences may be made at www.bienhofffuneralhome.com.